At the tender age of 17, Naasir Cunningham has already cemented his future as a star player in college basketball. But now with one year left before he is eligible to sign on for his scholarship at any university, this high school senior decided it was best for him and his team to go pro and take the money over playing under a coach that does not know how to properly develop players. 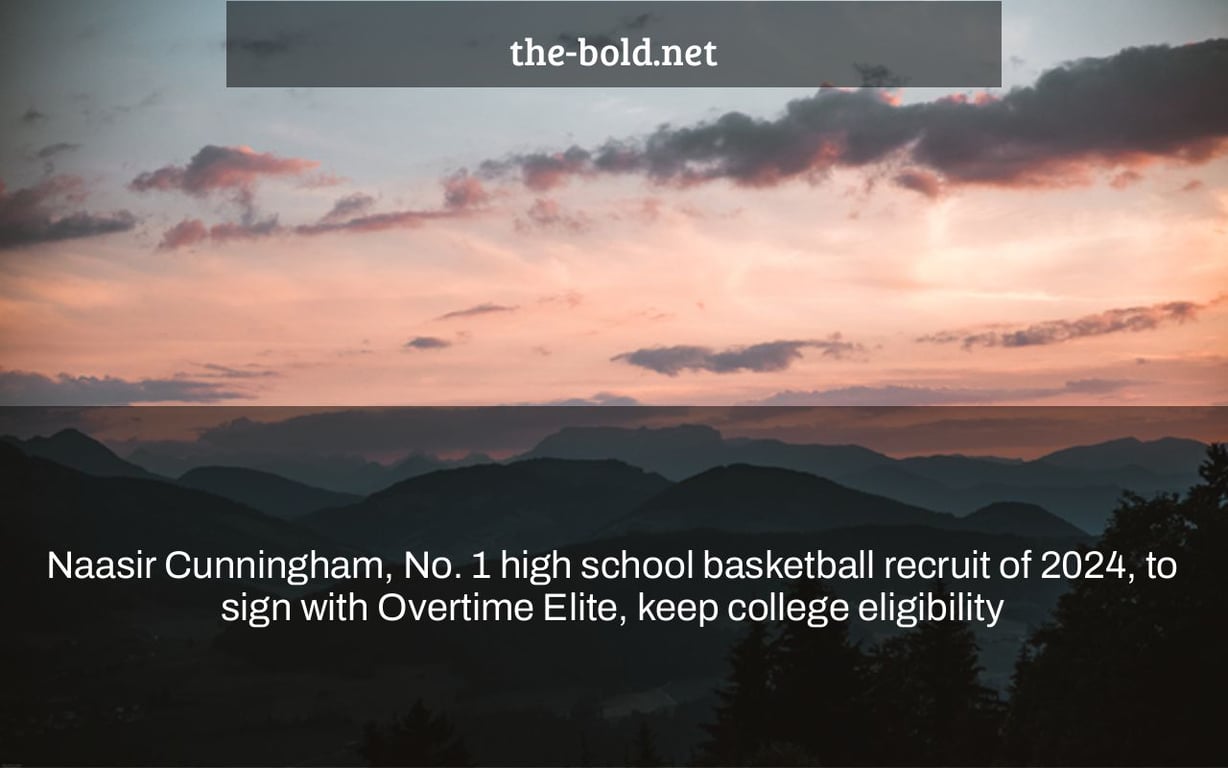 Naasir Cunningham, the top basketball prospect in ESPN’s Class of 2024, announced on Monday that he had signed with Overtime Elite (OTE).

“This is the perfect environment for me to improve as a player while still having the necessary education,” Cunningham said. “My family and I developed a bond over time, which was a major element in my trusting them with my future. I want to be the greatest basketball player I can be, a lottery selection in the NBA draft and hopefully one of the league’s finest. Overtime will put me in the greatest possible position to become the best player I can be.”

Cunningham is the highest-ranked recruit to join with the fledgling league and is regarded as an NBA prospect with a lot of promise. He is 6-foot-7 with a 6-foot-11 wingspan, has excellent mobility, and is a deadly perimeter shooter.

Cunningham will be the first athlete to opt out of receiving a paycheck from OTE, preserving his eligibility to play collegiate basketball after high school. In high school, he will still be able to profit from his name, image, and likeness, allowing him to earn more money over the following two years without risking his amateur status.

“Keeping my college eligibility was crucial because it provides me more alternatives when I’m done with high school and ready to make a decision about my next step,” Cunningham said. “Overtime offers the same academics as a traditional high school, but not every school has the same top-of-the-line equipment and facilities, as well as the greatest trainers, coaching staff, and other elite players. Competing against the best and collaborating with the best will help me achieve my objectives.”

Cunningham, a West Orange, New Jersey native, attended Gill St. Bernard for his first two years of high school. In last summer’s Nike EYBL 16U division, he was the No. 1 player in his class, averaging 15.4 points and 5.8 rebounds in 28 minutes per game for the New York Rens. In a triumph against 2022 No. 1 prospect Dereck Lively and Westtown School at the renowned Hoophall Classic in Springfield in January, he exploded for 23 points (5-for-7 from 3-point shooting), 11 rebounds, and three assists. Cunningham, who weighs 164 pounds, will have to bulk up his frail physique.

Just over a year ago, Overtime, a sports media firm with investors including Jeff Bezos, Kevin Durant, and Trae Young, introduced the OTE project as an academy-style alternative route for exceptional 16- to 18-year-old prospects to prepare for the NBA draft. Its inaugural season ended in Atlanta in March, with Ausar Thompson, a predicted top-10 selection in 2023, awarded MVP of the championships (over twin brother Amen, also a projected top-10 pick).

As an inducement to forego their college eligibility, the enterprise originally promised athletes six-figure wages, an educational component, state-of-the-art facilities, and significant resources in terms of coaching, front-office, and support staffs. To avoid closing the door on the NCAA path, the organization will now offer athletes a “scholarship” option and the possibility to forego a wage, which might be a game-changer for OTE’s recruitment efforts.

Cunningham, like expected first-round selection Jean Montero and projected second-round pick Dominick Barlow, might choose to spend his NBA draft-eligible gap year after high school with OTE in 2024. He might also elect to go to college.

Tim Nevius, an attorney and former NCAA compliance officer and investigator who has been publicly identified as an advisor to Overtime, assisted in the development of the OTE scholarship to guarantee it complies with NCAA guidelines. The firm said that it has engaged with the NCAA to explain its intentions and ensure that it is adhering to amateurism requirements, and that it would appoint a full-time compliance staff member to function as a liaison.

Overtime has already secured NIL agreements with high school and college athletes, including UCLA’s Jada Williams, South Carolina’s Zia Cooke, and Duke recruit Jared McCain, according to the company. And OTE scholarship athletes like Cunningham will be eligible for NIL agreements from a variety of sources, including third-party firms. On various social media sites, Overtime has a tremendous internet following of 65 million people. On TikTok, its primary account has more followers than both the official NBA league account and all 30 NBA teams combined.

Cunningham said he has been in contact with OTE for the last three months, particularly with Tim Fuller, the organization’s director of scouting and recruitment, who played a key role in his signing.

Fuller, a former college coach, stated, “Our strategy has always been to empower athletes and families with alternatives.” “We began the program by offering the possibility to become pro and get high-level development. For players aged 19 and younger, our player development strategy is the finest in the nation. We didn’t have the scholarship option when we initially began courting Cunningham. It’s now up to each family to decide which route they wish to follow. Having choices made it simpler to take action at a younger age.”

Last year, the NBA authorized OTE as a permissible scouting platform for clubs to send personnel to examine pro prospects after some back and forth. The league had many well-attended pro days, as well as a few dozen games in OTE’s Atlanta venue. In addition to premier prep schools, OTE is looking to schedule games against junior colleges, European clubs, national teams, and maybe the G League Ignite or NBA academies in Year 2.

21 of the 26 players from OTE’s initial recruiting class are expected to return, with the remainder matriculating out to the pro ranks following a postgraduate year. The league expects to have roughly 30 players on each of its three clubs next season, and will begin announcing the remainder of its acquisitions soon.

Naasir Cunningham, a high school basketball recruit of 2024, has decided to sign with Overtime Elite. This means that he will keep his college eligibility. Reference: how tall is naasir cunningham.